Poland beat Portugal by 13-5 in the final of the first World Beach Korfball Championship, completed today in Nador, Morocco. With Portugal being the highest ranked country in the beach discipline, Poland was up to a tough task, but they never let the Portuguese get into their game. Captain Tamara Siemeniuk was almost perfect in her shooting, and with strong rebounding and fast breaks, Poland gave a display of what modern beach korfball looks like: fast, fun, and exciting. Portugal was trailing 5-0 within the first 90 seconds of the match, and never  managed to catch up in the game.

After two intense and exciting days of competition at Nador’s Corniche Beach, this is the final ranking of this successful and unforgettable championship in Morocco:

Poland had advanced to the final by beating Belgium, the other clear favorite for the title next to Portugal in the semifinal by a Golden Goal. Belgium later secured the bronze medal by beating Hungary 10-5. 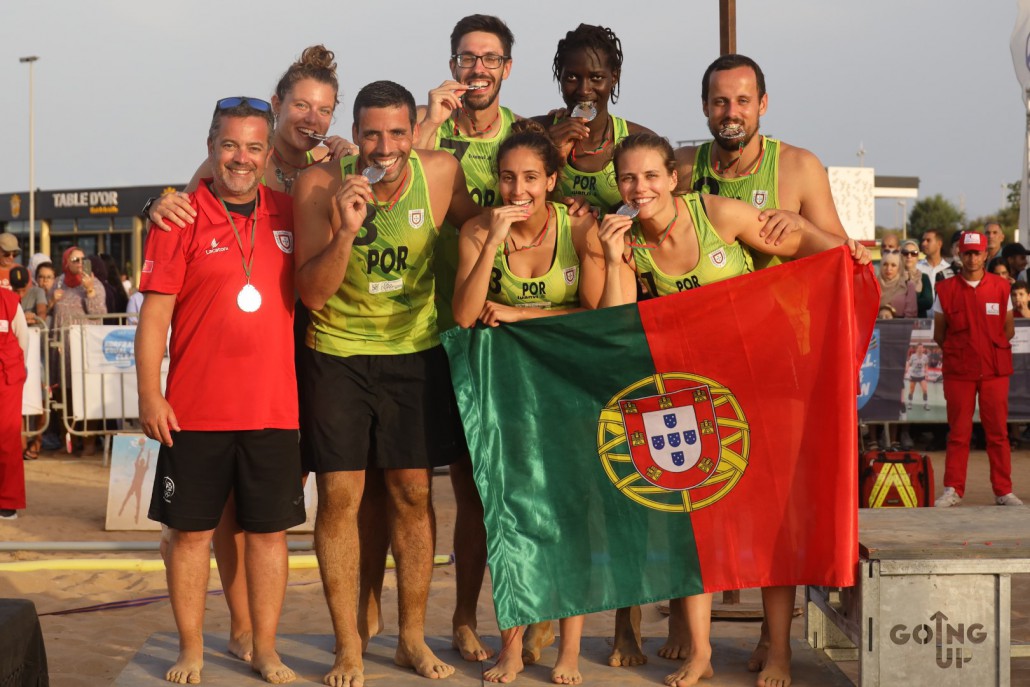 Tamara Siemeniuk was also crowned as the female top scorer of the event (22 goals), with Indian captain Sharma Vishal capturing the trophy for the male topscorer (27 goals). The team from India finished in the top half of the competition at 7th place. 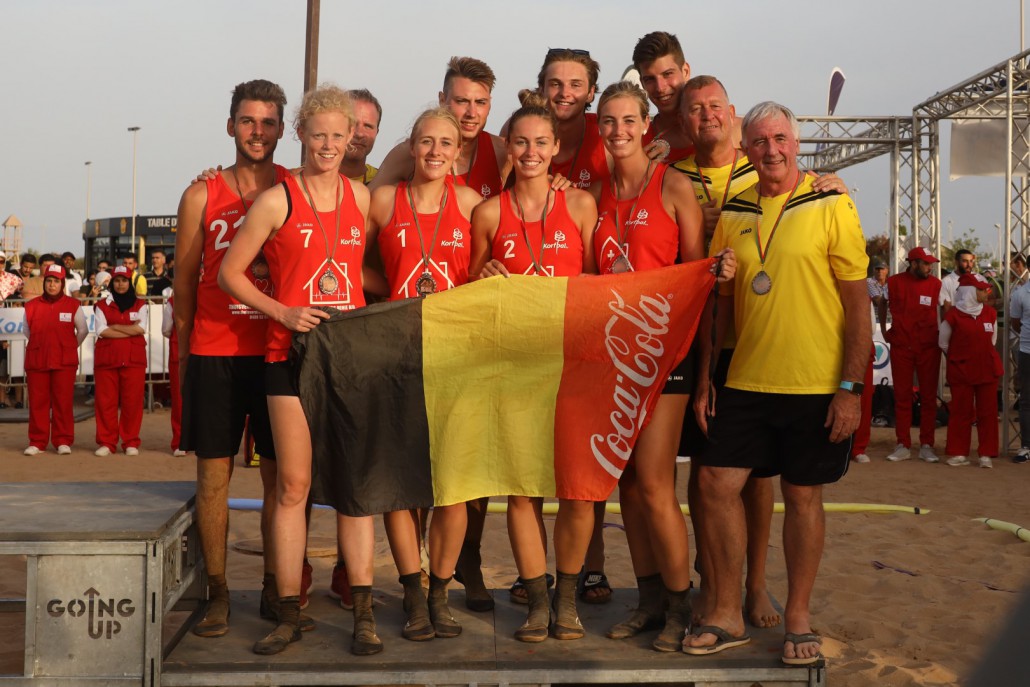 The first World Beach Korfball Championship followed  several years of playing Beach Korfball World Cups across all continents, and the IKF Council making the decision in 2018 to proceed with a formal World Championship. After two years of Covid-related postponement, the city of Nador could eventually deliver a fantastic and high profile event, with extensive media attention and contributing to the rapid development of korfball across the north African country. Morocco had a surprise result as they finished 6th in the event, losing the last placement match to the Netherlands.

IKF President Jan Fransoo was delighted with the event: “We saw many close matches, including multiple golden goals and even a match that had to be decided by penalty shootouts. Beach korfball has clearly shown the potential to level the playing field, as every single is unpredictable in terms of outcome. Further, the excitement of the local fans was impressive, with full stands at many of the matches, and a completely sold out final session on Saturday. We will continue to invest in the development of beach korfball, including targeting inclusion in relevant multi-sport games”. 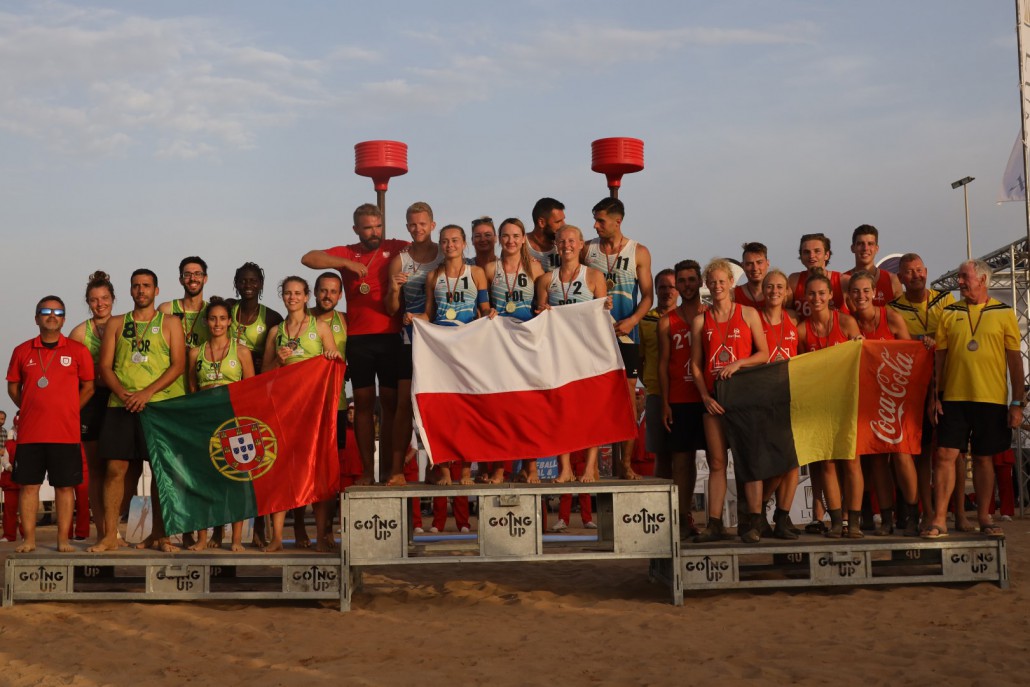 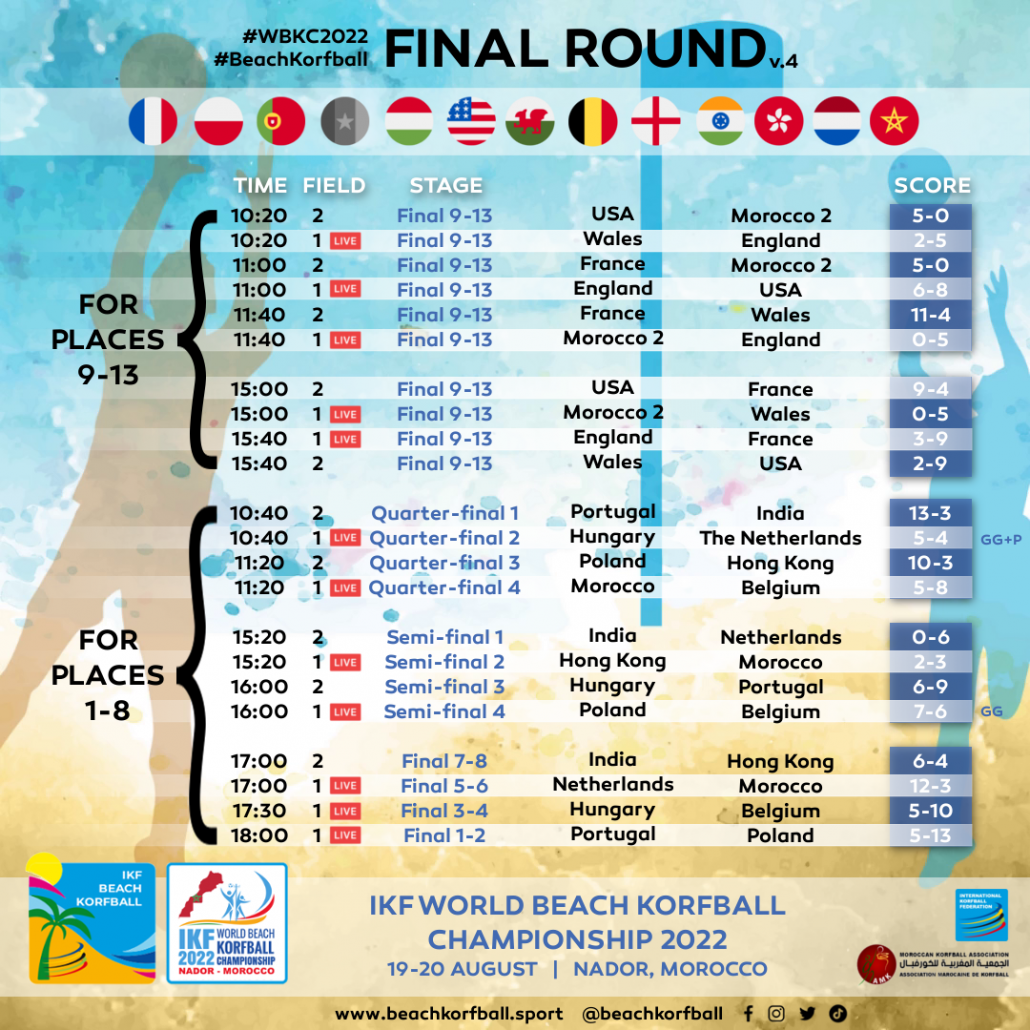 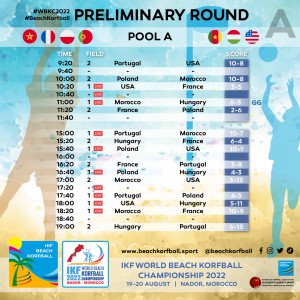 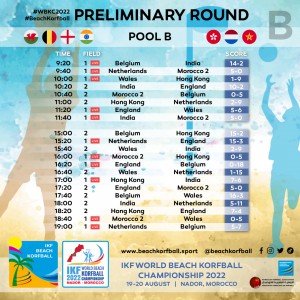 The award of this event from the IKF came months after an agreement that the Moroccan Association for Korfball and the Mediterranean Youth Association made with the Ministry of National Education to develop korfball in schools. Younes Cherfaoui (MAK president): “We are very proud to be able to organise the IKF World Beach Korfball Championship and to present the beautiful city of Nador to the korfball world. The event comes at the perfect moment to showcase korfball and really use it as an accelerator for the further development of korfball within Morocco.”

A live stream signal were be provided during the tournament on Field 1. To give all teams the opportunity to play broadcasted matches, the allocation of the fields was slightly adjusted in the previous announced schedule.

The teams were divided in two groups to play a preliminary round, and the final ranking of each pool decided which squads qualify to play on the second day for places 9 to 13 and 1 to 8.

All fans around the world were able to follow this tournament on www.beachkorfball.sport as well as on social media visiting the different @BeachKorfball profiles and via the hashtags #WBKC2022 and #beachkorfball:

The International Korfball Federation was glad to welcome the teams from the United States, and India, which which made their first appearance at an official international beach korfball tournament. 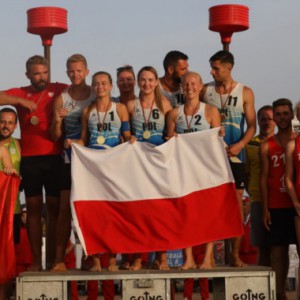 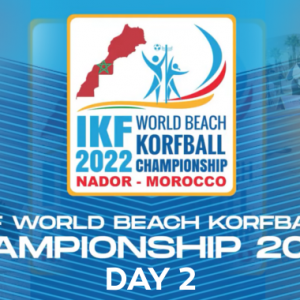 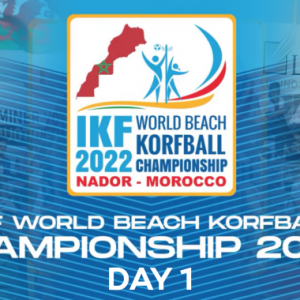 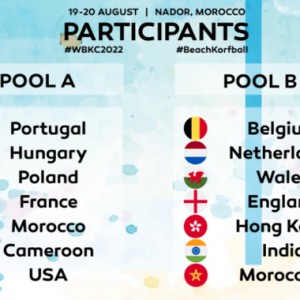