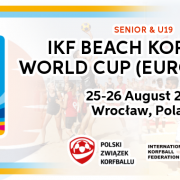 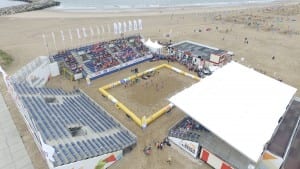 The first ever European Beach Korfball Championship will be organized from 19 till 20 August in The Hague BeachStadium, organized by the KNKV as a host.

History of the IKF

The IKF aims to spread korfball around the globe. It provides sixty seven (67) (as per 7 November 2015) affiliated member countries with financial, material, and structural support to achieve this goal. Philippines (61), Ghana (62), Costa Rica (63), Colombia (64), Ivory Coast (65), Cameroon (66), Morocco (67), Switzerland (68) and Sri Lanka (69) are the most recent new (associated) members after the decisions of the General Meeting 7 November 2015 in Antwerp (BEL). This General Meeting expelled Denmark and Surinam due to a lack of korfball activity.

The IKF has established a network of contacts in many countries and actively promotes the game by transfering knowledge internationally by exchange programmes and inviting selected korfball players, coaches, and administrators to its training courses in order to create a stable local structure in all 67 affiliated countries – see under IKF Members – on which a flourishing korfball organisation can be built.

The IKF General Meeting is the highest authority in the IKF. The IKF is managed on a daily base by the IKF Executive Committee – 8 members – and the IKF Council – 12 members.

The IKF stimulates the global awareness that korfball is a spectator, mixed gender, media oriented and innovative teamsport.

The IKF has launched a brand new logo for beach korfball. The logo is related to the official IKF logo, while keeping…
Scroll to top